On 1st November the WM and Secretary undertook a Fraternal Visit to Richmond North Yorks, to the Installation Meeting of St Patrick’s Lodge 295 IC. A very full Lodge Room held Masons from the Irish, Scottish and English constitutions – a wide variety of signs were demonstrated!!!

After a long traditional ceremony (in an Irish Lodge their Grand Lodge must approve every officer in writing) – which included time for the Master Masons to go to the pub when sent out from the Lodge and excluded from the inner workings – we all then went to the Kings Head Hotel for the Installation Banquet, which started at 1500. The WM seized the chance to leave when there was a break at 1800, but the Secretary stayed a little longer, having taken his campervan.

Interestingly the new Master, W Bro Joe Preece, is a PSAO Captain with the Scottish and Northern Irish Yeomanry in Cupar, Fife.  We suggested he might want to pay us a visit, Newcastle being partway between there and Richmond. The photo shows members of the Lodge with members of St Patrick’s Lodge no 77 IC from Newry, who were visiting – our picture shows the Officers of the Lodge with them. 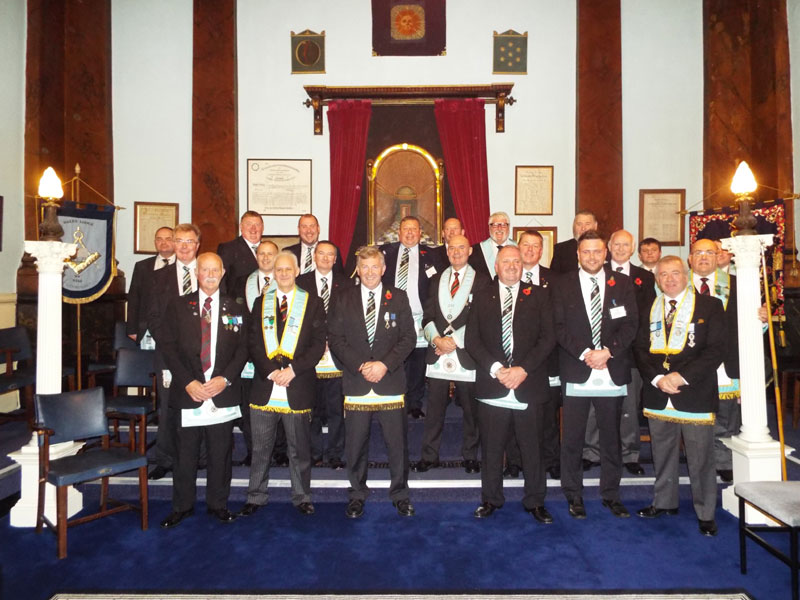 Our November meeting was well attended, despite the fact it was on Bonfire Night, with 11 visitors from Zetland and other Lodges in Guisborough as well as 5 former members of our late daughter Lodge, Defendit. As November is the month of remembrance we use the tools we formerly gave to Defendit and at the Festive Board display a small painting, being a copy of their banner.

W Bro Alasdair Watson, WM, presented a lecture on W Bro H E Burton RE, who was a Lodge member until his death in 1944, and the Rohilla Disaster of 30th October 1914.  After detailing our brother’s life, details of HM Hospital Ship Rohilla and the area of the disaster off Whitby, he described the events of the wreck and rescue attempts, illustrated with some actual pictures taken 100 years ago. He ended by explaining how parts of the wreck are still visible; artefacts are preserved at Whitby RNLI station and what had happened to Major Burton from the rescue until his death.

At the Festive Board 36 Masons then donated the magnificent sum of £170 to be sent to Tynemouth RNLI station in memory of our brother, who was Superintendent of that Station for many years and awarded the Empire Gallantry Medal (later the George Cross) for his work in taking the lifeboat to Whitby and helping rescue the last 50 souls aboard.

On 13 November the WM and Secretary ventured further afield to 10 Duke Street London, to make a fraternal visit to the Victoria Rifles Lodge no 822.  This was a Lodge formed by members of the Queen Victoria Rifles, one of the oldest reserve force units in the country. Around 10 years ago it was ready to hand in its warrant when some Military Masons discovered its plight and joined so as to save it. The Lodge and Regiment are historic – the first VC ever awarded to the TA went to Lt Woolley of Queen Victoria’s Rifles for his actions at Hill 60 in 1915.  It is now the Past Masters lodge of the Circuit of Service Lodges. Membership is restricted to those who are Past Masters and subscribing members of a Lodge which is a member of the Circuit, but even then you cannot join until after 3 visits so as to show you are willing to be an active member. It’s a long way from Tyneside to London!!!

Around 58 Masons met at 1100 for the Installation Meeting, which was about 2 hours long. Yet again there were interesting divergences of ritual and signs. As part of the meeting their SW, W Bro Lt-Cdr Brookes RNR (a Novocastrian) gave a presentation on Cecil Coles, the Band Master of QVR who was a good friend of Gustav Holst. Holst thought so highly of him that of his entire works only one is dedicated to a person and that is to Coles.  Sadly in April 1918 when leading a party to rescue the wounded they were all shot by a sniper. The others were killed and Sgt Coles fatally wounded, dying 3 days later.

The meeting was followed by lunch at the Army & Navy club (the RAG), ending around 1550 – a long morning and afternoon.

On 27th November a party of Provincial Officers, W Bro’s Mackereth, Heron, Reece, A Watson & Wady went to Newcastle Racecourse, not for an afternoons gambling, but to be at the Annual Provincial Meeting. It is often forgotten that it is the duty of all Provincial Officers, as well as the current Masters and Wardens of Lodges, to attend this meeting, if at all possible.  The meeting was packed.

Is there a 2666 brother with the skills and interest who is brave enough to take on a Lodge twitter account? W Bro Wady created the Facebook page (closed for members only) and W Bro Watson brought about this web presence.