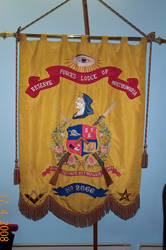 The Badge of the Lodge (as shown on the Lodge Banner) is of a combined Masonic and military character and consists of a shield surmounted on two crossed rifles, with fixed bayonets, and surrounded by a wreath of roses, thistles and shamrock. At the top of the wreath is the head of Her late Majesty, Queen Victoria, over which is the title scroll with an eye above.

At the bottom of the badge is a second scroll at the ends of which appear the dates 1837 and 1897 (alluding to the attainment of The Queen’s Diamond Jubilee) and, between these dates, the scroll bears the Lodge’s motto “Defence not Defiance”. Underneath is a third scroll bearing the number of the Lodge’s registration on the Roll of the United Grand Lodge of England.

The arms on the shield are in accordance with the following description:—

Quarterly; azure, a field gun or, for gunnery; gules, three castles argent, for Newcastle; gules, a hand grasping a grenade or, for line regiments; azure, a pick and shovel in saltire or, for en¬trenchment work. Overall a carpenter’s square argent charged with a pair of compasses sable, for freemasonry.

It is perhaps only fair to record (as a reminder) that, when the Lodge was founded, the Royal Air Force had not come into being, otherwise it may he safely assumed that those responsible for the design of the arms would have seen to it that this youngest branch of the three Fighting Services was depicted in some suitable way.